Limelight for the STC Executel

It looks like our STC Executel has found a well deserved bit of limelight on the New Scientist website. < See Here > It's part of an article about how valuable computer museums are and that they need to be supported. I totally agree. Anyone wanting to support The Centre for Computing History would be very welcome! Please contact them ...

What a nightmare :-( An original Apple Mac that we hired to a TV company has thrown a wobbly. They are shooting tommorrow and they came to set it all up today ind it wouldn't boot from the floppy disk. I had to drive down to London with a Mac Plus as a backup and a couple more boot disks. When I got there, it didin't want to boot from the disk supplied, so I tried the replacement that I bought with no joy. I tried the other replacement and it booted. WHY????? The disks were all the same !!! Hey ho, it least it worked. Fingers crossed it'll work when they film tommorrow ...

Back from Retro Reunited

Had a great weekend at the Retro Reunited & Acorn Word event. I took displays on behalf of the Centre for Computing History but the event was on the first floor so had to carry everything up two flights of stairs. Nightmare!!!

Had the great pleasure of listening to a presentation made by Steve Furber of Acorn / ARM / Spinnaker fame. I recently interviewed him for the museum, but his presentation complimented the interview quite nicely. I have filmed it for release on the museum website very soon ...

Sent off a load of retro gadgets today to T3 magazine. They're doing a feature of the top 50 most important gadgets or something along those lines. Hopefully they'll add a paragraph about the museum too ...

My interview with Steve Furber is now online. Its being really well recieved and some great comments posted but our server is taking a bit of a hammering!! 45Gb in 2 days Oucho!! Click the image below to give it a watch ... Cash in Your Gadgets

Been on the phone today to GS talking about a feature to be in one of the forthcoming episodes. They'll be talking about old gadgets that you have in the loft that are now worth a few quid on places like eBay. It'll feature the ZX80, the first iPods, Commodore LED watch and Speak & Spell amoungst others. I put the Speak & Spell in the mix because although they don't fetch a massive amount they are abused for circuit bending which I thought might make for an interesting feature ...

A TV company has asked for an original Apple Mac running System 1.0. They're doing a documentary for BBC2 about design classics. It poses a bit of a problem as our Mac 128 has no system disks and they're practically impossible to download. Hopefully one of the other volunteers at the museum will be able to pull something out of the bag. Where there's a will theres a way!!!

We've had a fantastic donation to the museum this week. The Exidy Sorcerer dates back to 1978 and is quite a hard to find machine. It uses modified 8-Track tape cartridges as ROM cartridges! Very ingeneous! Also with the machine was a load of documentation and software. A great addition to the museums collection.

Just been getting together a number of vintage computer and classic gadgets for an article T3 magazine is running. They're being packed off to be photographed. Sounds like it'll be a good article along the lines of '50 gadgets that have changed our lives' ... looking forward to reading it. The computer museum should get a plug too !!

Spent today in London at Alphaville2 studios at the final 'pick-up' shoot for the Syntax Era film.
For some reason to do with the BBC considering the Syntax Era title difficult for people to understand they have in thier wisdom changed the title to Micro Men. Personally I much prefer the Syntax Era title. It was clever and invoked a direct feeling of the times. Well, it did for me anyway!
The BBC have just released a temporary trailer which you can see by clicking the image below ... I took a BBC Micro, Spectrum and Acorn Atom which were all needed to shoot close-ups of the screens and the machines themselves. You know the kind of thing - close ups of the low resolution graphics on the screen showing every scan line that makes up the text ...
A couple of the shots had already been shot, but becuase there was a problem with camera on the first shoot they had to be re-shot.
It's amazing to see the amount of time and effort that goes into getting one very brief shot! Getting the lighting right, matching it to the original footage, ensuring the machines are spotless and so on ... all very time consuming.
I had a chance to see some short scenes from the film and I have to say that it looks really good. Extremely good! It has a great moody feel to the lighting but it has a light hearted feel to the script and they balance very well. It picks up the feel of the era very well indeed. My hat is off to Saul and the team that are putting it together.
I will be very proud to have been a part of it ...

An Interview with Steve Furber

I have spent the last two days in and around Manchester collecting donations for the Center for Computing History. As usual I met some great people and picked up some really interesting items, but I have to say the highlight of the trip was meeting with Steve Furber. For those of you who dont know, Steve is one of the key people (along with Sophie Wilson) responsible for designing the legendary BBC Microcomputer for Acorn in the early eighties. 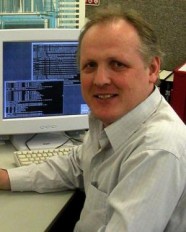 He is now the Professor of Computer Engineering at Manchester University and was awarded a CBE in 2008.
Since I was collecting computers for the museum I made the trip in a fairly large van. Here's a tip for anyone wanting to take a large van to Manchester University. Don't !
The van was 2.7m tall and the only parking available was an NCP car park with a height restriction of 2.1m !!! I drove around the vicinity for the best part of an hour before finally giving in and calling Steve for help !!! He was very helpful indeed and came out to get in the van and help find a place to park. We then spent the next 10 minutes doing u-turns in the middle of Manchester and bumping the van up curbs just to find a place to park :-) Great fun ...
We finally got back to his office, set up the cameras and conducted the interview.
I'd like to publically thank Steve for his help. Thanks Steve !
The interview will be available to see on the Computing History website very soon ...

Whats in the box?

Have had a number of donations lately to the museum. One from a very nice and respectable guy with whom I chatted to for some time about computing and how things have changed over the years. He donated a number of items including a very nice Sinclair QL. It wasn't in its original box, instead large-ish 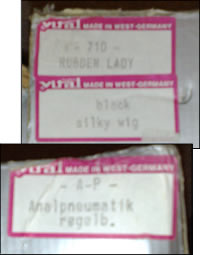 silver box. It wasn't until some weeks later that we got round to adding it into our inventory and removed it from the box to test. We noticed on the end of the box these labels :

Funny how you handle a box differently when you find out what used to be in it !!

Did we turn it down? Does Steve Jobs run Windows Vista on his laptop?
It’ll be a fantastic addition to the museums collection and hopefully we’ll have it online and available to log into at some point in the future.
The SGI Origin 2000 series was launched in 1996. This system has 48 GB RAM and 24 CPU’s running at 200 MHz each. In it’s time, it was probably among the top-500 computers in the world.
So we’re planning a road-trip (and boat-trip) to Holland and Back in a big van … very exciting!
Look at the picture … Isn’t she beautiful?

Today, Wall to Wall TV returned the 38 computers that we supplied to them for the Electric Dreams documentary.

They’re all in the museum entrance and need to be booked back in again. Not looking forward to that! You can hardly get into the museum now! I’ll have to sort them out tommorrow, which, incidently, is my birthday !!

Once they’re booked back in I have to get a Sinclair Spectrum and Apple Imac G3 ready for the new Gadget Show series. It never ends …

The IT Crowd - Computers for Set Design

Via the computer museum I became involved with supplying computers and 'geeky' items for the set of the thrid series of The IT Crowd. I put together a small van full of equipment, books, posters, magazines and gadgets to be left around the set behind Moss and Roy. You can see it all throughout series 3 - it was a real buzz !

If you look carefully you'll see the Altair 8800, a homebrew wooden ZX81 and 'webby' - a small beanie type bear that Jo-Anne bought for me many years ago from the now defunct Woolworths!

You can even see a Pure Energy 'alien' poster above the door which is extremely visible when they show anyone standing in the doorway of Jen's office.

Myself and Rich went to see the recording of two of the episodes down at Elstree Studios. It was fascinating to see how quickly it was all put together.

There's a story about it and a bunch of pictures of the set at : www.computinghistory.org.uk/news/3080.htm